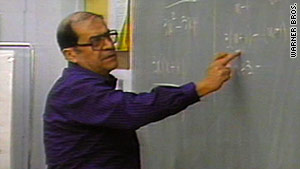 CNN reported the death of legendary teacher Jaime Escalante on Tuesday.  Escalante was a mathematics teacher in East Los Angeles.  He was made famous only in part by his wondrous ways with students, but also by the sheer disbelief that the state and district had that any teacher could helped students in that district score well in math.  He was then immortalized in the movie Stand and Deliver, starring Edward James Olmos.

We need more teachers like him, and we need more people to believe that there can be teachers like him.  The so-called “No Child Left Behind” Act, is leaving all children behind, and desperately needs to be reformed.  Perhaps one thing we could do is pay for more teachers’ educations in exchange for several years of service.  Perhaps another thing we can do is fund schools properly.  It’s a particularly serious problem in California, with no easy answer.  Here is a well written article that explains how the local tax base cannot even take matters into their own hands unless they expend a WHOLE LOT. Not that it would help East LA, mind you.  Perhaps this obituary should be for the California public school system.