Back in 1999 the Union of Concerned Scientists came out with a book entitled The Consumer’s Guide to Effective Environmental Choices.  This was based on a report that was roughly entitled, “Paper or Plastic: Who Cares?”  The number 1 thing that UCS said that one could do for the environment was to drive less and buy an efficient car.  The number 2 thing one could do was to eat less meat, and most specifically beef. Well now CNN has an article about just this.  Borrowing a graph: 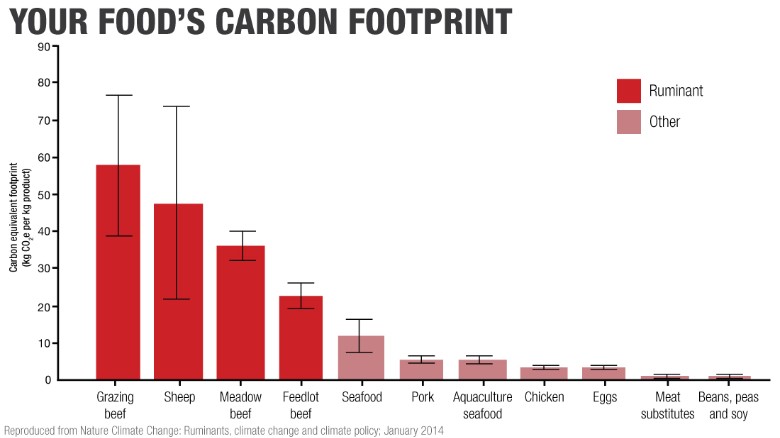 In that article, the author calculates that eating 1.27 lb of beef has the same carbon footprint as a 70 mile drive in a car that gets 21 mpg.  In other words, that number goes up with a more efficient vehicle. He argues that to help arrest the rate of global warming we need to eat less meat.

Even back in 1996, when the first UCS report came out, the one thing I could do for the environment was eat less beef. (I’ve since curtailed my driving, and Christine and I have reduced to 1 vehicle.)  The bad news is that lamb is probably just about as bad (wah!) and I will probably reduce but not eliminate my lamb consumption.

The above graph only looks at carbon footprint, and probably not all of it.  1 lb of beef requires about 1,800 gallons of water.  When I lived in California, this number seemed unsustainably large, even while we were being hit with El Niño after El Niño.  In addition, cattle also cause grazing damage, although it may be possible to mitigate those effects.

Pigs are a different matter.  I stopped eating pork products when several Colorado counties became awash in pig effluvia.  It wasn’t scientific, but I figured I could do my part by simply reducing demand for the animal.

I’ve refrained from writing this sort of article.  This was a personal choice I made, and I really didn’t push it on anyone.  I’m doing so now – just this once – for my daughter, so that she and her generation have just a little less damage from our generation to repair.