The attack on DNS provider DYN’s infrastructure that took down a number of web sites is now old news.  While not all the facts are public, the press reports that once again, IoT devices played a significant role.  Whether that it is true or not, it is a foregone conclusion that until we address security of these devices, such attacks will recur.  We all get at least two swings at this problem: we can address the attacks from Things as they happen and we can work to keep Things secure in the first place.

What systems do we need to look at?

In addition, researchers, educators, consumers and governments all have a role to play. 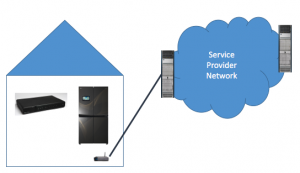 What do the providers of each of those systems need to do?

What follows is a start at the answer to that question.

It’s easy to pin all the blame on the endpoint developers, but doing so won’t buy so much as a cup of coffee. Still, thing developers need to do a few things:

There are some attacks that only the network can stop, and there are some attacks that the network can impede.  Authenticating and authorizing devices is critical.  Also, edge systems should be quite leery of devices that simply self-assert what sort of protection they require, because a hacked device can make such self-assertions just as easily as a healthy device.  Hacked devices have recently been taking advantage of a gaming mechanism in many home routers known as Universal Plug and Play (uPnP) which permits precisely the sorts of self-assertions should be avoided.

Providers need to be aware of what is going on in their network.  Defense in depth demands that they observe their own networks in search of malicious behavior, and provide appropriate mitigations.  Although there are some good tools out there from companies like Cisco such as Netflow and OpenDNS, this is still a pretty tall order.  Just examining traffic can be capital-intensive, but then understanding what is actually going on often requires experts, and that can get expensive.

Infrastructure upon which other Internet systems rely needs to be robust in the face of attack.  DYN knows this.  The attack succeeded anyway.  Today, I have little advice other than to understand each attack and do what one can to mitigate it the next time.

History has shown that people in their homes cannot be made to do much to protect themselves in a timely manner.  Is it reasonable, for instance, to insist that a consumer to spend money to replace an old system that is known to have vulnerabilities?  The answer may be that it depends just how old that system really is.  And this leads to our last category…

Governments are already involved in cybersecurity.  The question really is how involved with they get with IoT security.  If the people who need to do things aren’t doing them, either we have the wrong incentive model and need to find the right one, or it is likely that governments will get heavily involved.  It’s important that not happen until the technical community has some understanding as to the answers of these questions, and that may take some time.

And so we have our work cut out for us.  It’s brow furrowing time.  As I wrote above, this was just a start, and it’s my start at that.  What other questions need answering, and what are the answers?

One thought on “Learning from the Dyn attack: What are the right questions to ask?”