I travelled by air to Singapore. But what if one wanted to go from Europe by car? 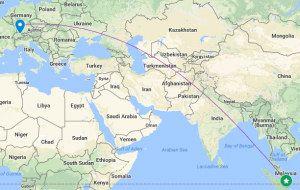 Recently a number of us trundled off to Singapore to attend the 100th Internet Engineering Task Force meeting, during which we shared our ideas on how to improve the Internet.  But precisely how did we all get there?  Why, by plane of course!  In the case of yours truly, I went from Switzerland by way of Bangalore, India.  These are long flights: the short haul from Bangalore was four hours and twenty minutes.  The non-stop return flight was just over twelve hours, thanks to favorable winds.

But what if you wanted to drive?  After all, instead of flying from San Francisco to Las Vegas, I drove; and I very much enjoyed the scenery.  What would it take to get all the way to Singapore by car?  Is it even possible?  A little check on the map shows that it should theoretically be possible to travel the distance by land, with the occasional bridge crossing here and there.  How would one even begin to plan such a trip?  Well, for me it would be with everyone’s favorite navigation tool: Google Maps.  We start there.

There’s that inviting “Directions” button.  If I just click it, I’m hoping that it will show me a few alternative routes, and a driving time.  Of course it will indicate the tolls and the fact that we are crossing borders. 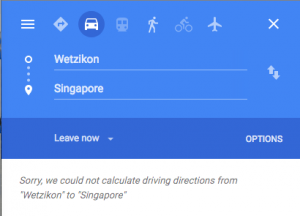 Unfortunately, the invitation was quickly rescinded.

What’s the problem?  Well, like a good computer scientist I began to bisect the route to see if I could determine where Google thought there was no route.  I figured, ok let’s see if I can get to India from Switzerland.  I got the same answer. 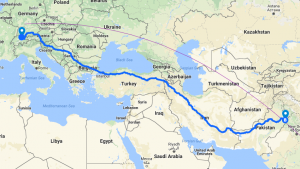 But when I asked if I could get to Lahore, things began to improve.    That would be an eighty six hour route, covering 7,734 kilometers.  There’s only one problem: it would take me straight through the heart of Iran, and I very much doubt I could get a transit visa for this purpose.  But now at least we have a route to Lahore.  A little dragging and dropping in Google Maps shows that with a mere six hour detour, one can go over the Black and Caspian seas, instead of under them, as such:

Well, very good!  We’ve gotten ourselves half way there.  To do so, we travel through Germany, Czechia, Poland, The Ukraine, Russia, Kazakhstan, Uzbekistan,  Afghanistan, and finally into Pakistan.  Right about now, Iran is beginning to sound pretty good, by the way.  An airplane more so.  Consider this little factoid: the route takes us through Eastern Ukraine which right now is not exactly being friendly with the rest of the country.

It turns out that one can in fact cross the Pakistan/India border with a car at Lahore if one has all the right paperwork.  One enters by the city of Amristar.  Now let’s see if we can get from Amristar to Singapore.  Surely enough, one can! 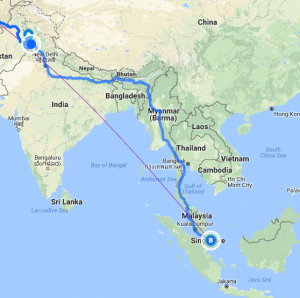 That’s another 105 hours or 6,404 kilometers.  One travels across India, avoiding both Bangladesh and Bhutan.  While it is probably possible to drive into Bangladesh, Bhutan is virtually impossible to enter without serious amounts of paperwork.  Of course, this whole trip would require serious amounts of paperwork, but Bhutan would require its own stack.  One can do this because the Indian states of Assam and Manipur juts quite far to the east.

For those keeping score, this route is just under 14,000 kilometers, and would take, if driven straight, ignoring traffic (hah!), about 200 hours.  That would be about 25 days, if one limits one’s driving  to eight hours per day.  The route changes based on which citizenship one holds, to be sure.  Many countries would require visas, and car permits.  One challenge that one has to consider is that this is the most direct route, according to Google Maps.  That doesn’t mean it’s the easiest route.  For one thing, many of the directions themselves, are written out by Google in the local script.  For the Ukraine, that means Cyrillic.  For Myanmar, that’s Burmese.  Of course, this says nothing of the languages themselves, nor whether anyone would accept Mastercard.  Hotels?  There may be inns along the route.  Google is pretty good at spotting these and (perhaps more importantly) gas stations.

Having performed the exercise, I think it would be fun to do parts of this route.  In particular, traveling in north-western India and into Myanmar seems interesting.  I wonder what Hertz would say.  Apart from the collision damage waver, and all other insurance, I’m pretty sure I’d want a very simple vehicle that could be easily repaired and could handle varying qualities of gasoline.  An old Range Rover with an extra tank might be a good deal.  Probably not the trip to take a Tesla.

To play around with this route, have a look at the  Google map.  Be sure to expand out the directions.  Note the occasional U-Turn one is required to make.

Some final geographical points: this trip, while long, roughly follows the great circle route, and so it’s fairly optimal, from a distance standpoint.  It is also probably the farthest south one can travel from Europe or Asia without taking a ferry.  Assuming one can travel it at all.  With ferries, it may be possible to get as far as Timur, but I haven’t checked that.